There’s a Cost of Living Crisis. And, an Upcoming Budget. What Can We Expect? Can the Second Solve the First? 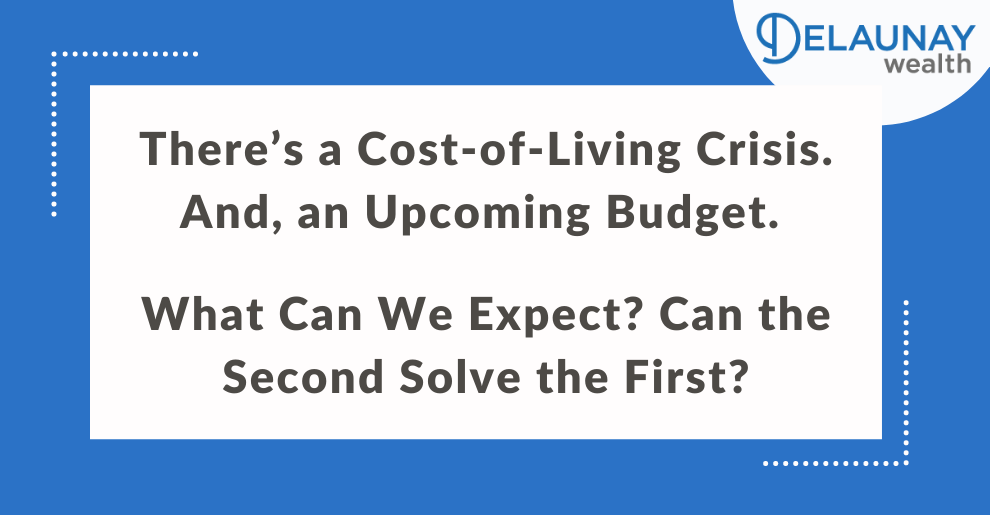 For many, life is getting more expensive.

Lloyd French of Delaunay Wealth Management sifts through the analysis and the facts. Plus, we’re nearly at Budget time, so we’re speculating about what it could mean for your investments and assets.

It is a fact universally acknowledged that, along with the trees displaying spectacular spectrums of colour at this time of year, there’s always an Autumn statement. Column inches turn into column miles, full of predictions and before-the-fact examination, yet this year there’s another grim issue that’s been grabbing the headlines:

Families are anticipating a cost-of-living crisis this winter and even well into next spring, as incomes are squeezed. We have a perfect storm of conditions and their causes, all coming together at a time when we least need them, leading to no small degree of economic discomfort.

Is Christmas cancelled? Well, no, but the ease of access to affordable goods and services that we’ve enjoyed up until now is suddenly harder.

Moreover, there’s a Budget afoot, and in my view, the government is under close scrutiny. We need to keep paying for the post-Covid economic recovery, yet we’re also looking for solutions to solve the mountainous leap in prices. There’s a creeping suspicion that something wicked this way comes. (Macbeth, in case you were wondering.)

Where Does This Leave You as an Investor?

In a time of uncertainty, certainty certainly does help.

As an independent financial planning consultant, I’d advise you to consider planning ahead. I’d be happy to speak to you on 0345 505 3500 to arrange a review of your finances. A financial health check could shine a clear light on where your assets are now, and help generate an invaluable forecast for the coming months.

Opinions and reasons behind these issues may vary, so without making this an in-depth opinion piece, I’ve summarised the general consensus.

Spikes in the Energy Costs

Over the last six months alone, energy costs have risen by an eye-watering 50%, due to massive increases in the price of wholesale energy. Reasons could include low UK and European storage levels, and a reduction in pipeline deliveries.

The ironically named energy price cap has been raised again, meaning that customers on a flexible tariff could be in for an unpleasant surprise or two.

Not good news here, either. A litre of petrol in the UK has reached its highest level since September 2012 (average 140.22p). And, diesel doesn’t escape price hikes. According to the RAC, global oil prices could be the cause.

There are also issues with our supply chain, and labour shortages, including a devastating lack of HGV drivers to deliver petrol – see above. Not to mention the rate of inflation, currently at 3.2%, its highest level since 2012, further to a 1.2 percentage point rise in August. (source)

What Could be in the Autumn Budget?

Does the government have the solutions to these challenges?

A good question, and in my opinion, one that needs to be answered directly in the Budget on October 27th.  Whilst there was much positive talk during September’s party conference about raising the bar in terms of earnings, recovery looks slow. And, the deficit still has to be reduced to more sustainable levels. Rishi Sunak has mooted the idea of a “technical budget”, which sounds intriguing, to say the least.

The previous Spring Budget (see our analysis here) saw what I referred to as some “tinkering around the edges”; nothing too immediate, drastic or impactful, at least for basic rate taxpayers. Rather, the Chancellor introduced some “stealth taxes” through freezing allowances

There could be larger, more impactful tax rises to come. Already, National Insurance rates have been increased by 1.25%, with plans to raise £12 billion more for social care and the NHS. Could the following be on the cards?

Corporation tax increases hit the headlines last Spring, with rates set to rise substantially in 2023, and several types of Covid-related support due to be withdrawn very soon. Further draconian measures seem unlikely, but SMEs are always on HMRC’s radar, so watch this space.

It may be time for CGT to take centre stage, and finally reach parity with income tax rates. Should the government announce a rise in say April 2023, this could see a Treasury boost as asset owners suddenly rush to sell up. A straightforward short-term gain for the government’s coffers, perhaps.

Also, there are other options: maybe removing CGT exemptions and reliefs, such as Business Asset Disposal Relief, which used to be called Entrepreneurs’ Relief. There are two CGT reports outstanding from the Office of Tax Simplification (OTS) to which the government is yet to respond, so we’ll have to wait and see.

It’s possible that these reliefs for investors (including EIS and SEIS schemes) will be enhanced, in order to boost business investment. Now that the UK is no longer restricted by EU rules, the Chancellor may have spotted an opportunity here.

Yet, if there’s one thing we can say for certain about Inheritance Tax, it’s that with so many caveats, exceptions, and exemptions, it’s generally seen as complex. Thus, the rules are ripe for streamlining and simplifying. Making things easier and more obvious could help to boost the amount that the government collects.

Indeed, the splendidly monikered Office of Tax Simplification is on the case again, with an IHT-related report published in July 2019 still awaiting a response from HM govt.

The so-called pensions “triple lock” will be suspended for one year – this has already been announced – due to a skewed increase in average earnings during the pandemic. Other changes could be made, for example lowering or removing the higher rate or relief or reducing the lifetime allowance. Crystal ball time again, though.

Interestingly, with regard to energy, there are plans to move green energy surcharges, currently applied to household electricity bills, to gas bills. Part of the government’s “net zero” drive, this could add even more to household bills, although it’s likely to be phased in slowly.

Whatever happens, there will need to be a balance between popularity and practicality. What needs to be done may not go down too well, given what the UK has come through (and everywhere else, of course). What does recovery look like, then? At the moment, it’s not a great picture – in my opinion.

But, things can change, and often do. Let’s wait for October 27th. In fact, look out for our analysis of the Autumn statement shortly afterwards.

Please note: This article contains links to third-party websites, Delaunay Wealth Management Ltd is not responsible for the content of third party websites.

« September 2021 Newsletter » The Autumn 2021 Budget. What Were the Key Announcements, and How Do they Affect YOU as an Investor?